A Big or Small Random Act of Kindness

An Act of Kindness or A $100 Backpack

I’ve been thinking a lot lately about the phrase “random act of kindness”. Every day on my way to class, I see the same faces. They are on the corner of an intersection or sitting in the shade of one of our city’s many bridges. In addition, I see them walking back and forth down the same stretch of road. Occasionally, they stop to rest on an open bench.

Most of the faces I see are tired and well-aged. Exposure to the elements and seasons has left their skin tightly wrinkled and toughened up. Sunspots dapple their cheeks. And permanent furrows rest pensively above their brows. These faces belong to real people with real stories that many would find difficult to hear.

One such face belongs to an old woman who is tall and lean. She has mousy, shoulder length hair. It frizzes a bit on the ends. and hangs to the sides of her long, thin face. Her skin is tan and leathery. She dresses in layers, even during the summer. Every day, she holds out a torn piece of cardboard for drivers stopped at intersections to see.

In addition, there is a man with a small dog who comes to rest on a particular cement bed every now and then. His white-grey hair has slowly traveled from crown to chin over the past year. He is most often seen sleeping while his dog keeps watch.

Once, there was a veteran also, who stood at the same intersection as the old, tan woman. He had his own piece of cardboard with black letters. Those letters bled in the rain. As a result, the sign was barely legible.

I see one person most often. His name is Walter. To pay for bus fare, he does small jobs. For example, he picks up coffee orders for local offices to pay for his bus fare. Walter’s prefers to sit at the end of the same bridge I happen walk across every day.

He usually wears a baseball hat, an old polo shirt, and long slacks with small holes in the knees and around the ankles. Sadly, he walks with a limp. I often see him staring out at the river thoughtfully. However, he always has a smile on his face for me when we exchange our morning greeting. “Hello, little miss sunshine! Good to see you today, God bless!”

We didn’t always extend a greeting to each other. I used to turn my head towards my phone or stare out at the river so I didn’t have to make eye contact. Occasionally, I’d shake my head to admit my embarrassment that I had nothing to give.

I don’t know what inspired me to do it, but one day I simply said “good morning” to Walter. His eyes lit up. He wasn’t invisible. I don’t often have cash on hand, so I started to pack extra granola bars and water bottles to pass out.

Soon, we started to recognize each other. Over time, even if I have nothing to give, we always exchange our usual “good morning.” I had thought for a long time about something more that I could give Walter. There had to be something i could do for him and the other people I passed. I was looking for something that would go beyond a small snack, the occasional dollars for bus fare, or smile.

Service is one of our core values. And every month each employee at Found Advisors performs an act of service in the community. We do this as a team or on our own.

This month, we were each given $100 to spend on a random act of kindness. Inspired by my commute, I decided to use my $100 to build personalized care packages. I based them on the needs that Walter had expressed in the past. In addition, I took ideas from the list of products homeless shelters in the area commonly ask for.

I bought three backpacks from 5 below and filled them with food and hygiene products. The bags also included simple entertainment, such as playing cards and crossword puzzles.

Each backpack cost a little over $30. I stuffed each one with many of the same things that I take for granted everyday. The bags included things like shampoo, soap, toilet paper, band-aids, food, toothpaste, toothbrushes, nail trimmers, pencils and journals. 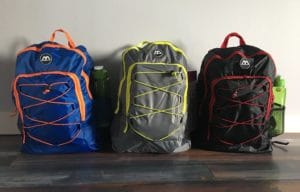 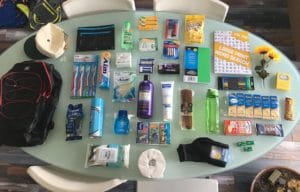 The Joy of a Random Act of Kindness

Nothing can describe the joy of giving something to someone who has nothing. I have been able to give out two of my three backpacks so far. The receivers have both thanked me. They sit a little taller and look noticeably healthier.

Of course, Walter was one of them. I put a new baseball cap in his bag and noticed him wearing it the very next day. As I neared the end of the bridge, he reached out a hand to wave me down. Then he personally thanked me for giving him the supplies to wash his clothes and shave his face. He hadn’t been able to do it in months and felt so fresh and confident.

Walter has truly taught me to appreciate the smallest things in life. The next time you find yourself walking by one of “those” people, don’t turn your head or apologize for not having anything. Say a simple “good morning” and see how far that small act of kindness can go.